Bulk Cargo Terminal, in technological and financial terms, is the most significant subproject within the Trade and Transport Integration Project, whose construction amounted over 400 million HRK. Its function is to increase the capacity of bulk cargo to more than 6 million tons per year in it the final phase as well as to improve transshipment technology, which will result in an increase of the bulk cargo traffic. This will improve the port competitiveness, as well as environmental standards of cargo handling and ultimately it will enable better market positioning, according to which the importance of the port of Ploče in the European business environment would be recognized. The Terminal is positioned in the southwestern part of the port on the shores of the Vlaška canal. Two phases of construction are planned. The first phase of the Terminal is built with reduced transhipment equipment with a capacity of 3.6 million tons per year.

The pier construction of the new Bulk Cargo Terminal allows mooring of ships up to 180 thousand DWT (deadweight tonage – carrying capacity). The pier is an open reinforced concrete structure 317.5 meters long and 30 meters wide, with approximately 56 meters long and 22 meters wide access bridge that connects the pier structure with the storage area. 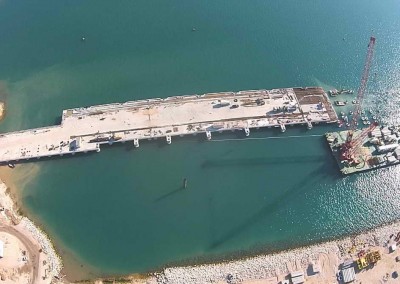